It is not everyday you get a chance to drive out to the country in Colorado, and help out on a ranch.  Recently, the Moo Sul Kwan Black Belt Team did precisely that.  It was a great experience and we were able to give our help and show our appreciation for someone who has done so much for our Moo Sul Kwan family.  If you have been to a Camp MSK, you know that we owe all the great food and planning to Cindy.  Thank you Cindy!

Cindy started out the day by giving us a tour which included some of the history and challenges she has faced since purchasing the property.  We were introduced to the multiple chickens, ducks, dogs, cats, 4 horses and her cow.  Two of the horses are wild rescues and are Mother / Daughter.  They are beautiful. It was then time for the 25+ black belts to get to work. 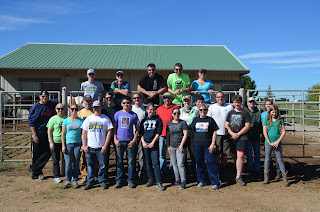 A team set out to teardown and stack the irrigation line that ran across 3 sections of the property.  We had no idea what we were doing, but after a little trial and error we found a good pace and had the piping stacked up in no time.  At some point during our adventure a couple of the ducks were loose and group of had a great time chasing them around.

One of the other teams set out to demolish the overgrown garden.  It is amazing how quickly such a daunting task can be accomplished when a group of people with good leadership are set to it.  The group tore into the weeds and brought down the old fence in record time.  They celebrated with a large bonfire leaving the weeds and tree limbs  in a nice ash pile.

At one point some of the team was seen riding bareback around the property.  The horses were given quite the workout that day.  The cow was even given a special treat.  We had to push and drag that cow out of its comfortable stall.  She did not want to leave her “safe place.”  But after we drug her into the field, she was prancing around, jumping and trying to get the attention of all the neighbor cows.  It reminded me of how students must sometimes feel.  There are times their parents must drag them kicking and screaming.  Once they are in one of our dynamic classes, they are happy, punching, kicking and enjoying themselves.

Yet another group was set to shovel the horse and cow stalls into what seemed like 70 wheelbarrow fulls of what Greely calls the smell of money.  Only a few mishaps with the wheelbarrow occurred and the team was smiling ear to ear at the end.  Mr. Orton came prepared with his chainsaw to make short work of tree trimming one of the other black belts found his calling with the organization of the barn workbench tools, nuts, bolts and miscellaneous items.

After loading up the trailer a team was off to the dump.  The trip was largely uneventful, but we did get to know each other a little more.  At the dump we were slightly concerned that we may have to restrain Mr. Scott and remove any of the ‘small treasures’ he might find there.  The team then continued on to clean out a storage unit and return the items to Cindy and her kids.

Cindy served a wonderful lunch for the entire team and we finished the day off watching our master instructors construct an engineering feat.  Cindy would no longer need to drag a hose from trough to trough.  The group had created a watering system that could be used to fill all the troughs at the same time.

In all it was a very successful day.  It was a great example of how big of an impact we can have on our community.  Our 11th Annual CTI Food and Clothing Drive is another example.  We had the chance to recently fill the food banks and give hope to those in our communities that need it the most.

We can make a difference. What may take a single person weeks or months to accomplish, we can knock out in a single morning!
Posted by Colorado Taekwondo Institute at 2:02 PM