In a recent study at the University of Hawaii at Manoa, researchers looked at the effect of a tennis player’s grunt on the opponent.  In the study, thirty-three undergraduate students watched footage of tennis players hitting the ball across the tennis court.  In some of the videos, the player hitting the ball would grunt at the moment their racquet made contact with the ball while in other clips no sound was made.  The students participating in the study had to use a keyboard to state the direction the shot was going to go as quickly and as accurately as possible.  Researchers found when the player emitted a grunt, it caused “significantly slower response times, and significantly more decision errors” on the part of the student on the keyboard.  The student responding on the keyboard could not pinpoint the trajectory of the shot as accurately or as quickly.

Take a look at footage of Spanish tennis player Rafael Nadal.  Each time he hits the ball he emits a grunt. The grunt clearly comes his stomach.  If you look at photos of him at the moment of impact you can see the grunt tightens his stomach.  It helps him breathe, and I’m sure he would tell you it helps him hit with much more force.  Nadal is so well known for his grunt, his opponents have openly taunted him about it on the court.  This year Nadal achieved the career grand slam and finished the season ranking number 1 in men’s singles.

In Moo Sul Kwan Taekwondo, we kihap (Korean for "yell") for the exact same reasons.  If we apply the same ideas of the study to sparring, we can see why and how the kihap not only helps us with our moves but throws our opponent off.  When you kihap while throwing a move (grunting while hitting the ball), the extraneous sound causes the opponent to react slower and most likely judge the trajectory of your move incorrectly.  You could easily take advantage of this by changing the trajectory of your move while their brain is momentarily suspended and attempting to make a decision.  This is why a low roundhouse or front kick fake to the knee with a huge, fierce kihap quickly changed into a roundhouse to the side of the head can be very successful.     Also, if you kihap while your opponent is throwing their move, you know that for a split second their focus will be distracted enough to cause them to make a “decision error.”  They could question their move or end up changing the trajectory, giving you time to get in there with a quick reverse punch.

We also know that kihaping helps us breathe and tightens our stomach, which gives us a stronger core and protection against hits.  And on the flip side, as martial artists we have to be able to tune out our opponent’s kihap and be so intensely focused that we triumph over the momentary suspension of reaction in our brains. If you make every kihap have intent, each one will be successful, and you’ll finish the year ranked no. 1 in sparring.
Posted by Colorado Taekwondo Institute at 9:51 PM No comments: 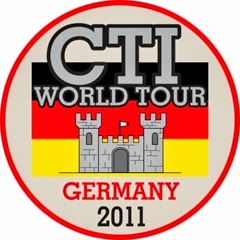 The CTI Black Belt Demo Team is preparing for its trip to Germany this summer.  This will be CTI's fifth World Tour in ten years - South Korea in 2001, Ireland in 2004, Mexico in 2006 and New Zealand in 2007 preceded the trip to Germany the CTI went to Russia.

Along the way, the Demo Team has competed, trained, given seminars and demonstrated to fellow Taekwondo practitioners while learning about the different cultures of just some of the 70 million Taekwondo players in the world.

This year the Team is going to explore the Bavarian region of Southern Germany with a short time in Salzburg, Austria.

There are also 16 other family members and friends going as a support crew!

Team practices are on Saturdays after the regular class and meeting schedule.
Posted by Colorado Taekwondo Institute at 10:42 PM No comments: