As the world gets ready to ring in a new year, people from all walks of life will reflect back on the previous year and write lists of resolutions to change themselves.  These promises come from a desire to start fresh as we enter the next year of life.  Unfortunately, only between 8 and 12 percent of these resolutions are successful.  How can we make promises to ourselves that we are more likely to keep?

At the Colorado Taekwondo Institute we are setting and achieving goals as a continual part of our martial arts training.  Part of the second Aim of Moo Sul Kwan Martial Arts is to help students set and achieve appropriate goals.  Using the techniques that are taught to us in during our martial arts training we can set goals and resolutions that are achievable and will help us get to our bigger goals; black belt, weight loss, healthy eating, becoming better at an instrument.

One of the best ways to achieve our resolutions it to setup smaller goals and milestones that we know with a little extra effort we can achieve.  Breaking up big challenges into smaller manageable chunks we are more likely to achieve them, or if we miss, know that we can get back on track without monumental effort.  You can see this reflected in the way we learn poomse in our Taekwondo classes.  We learn only short sections of a poomse at a time.  Our small goal should always be to learn those new sections with the ultimate aim of learning the whole thing in time.  Break up any resolution you make into smaller achievable goals that can be planned and focused on.  This will make it much easier for us to effect bigger changes.

In our Taekwondo classes there is a relentless focus on basics to achieve success.  If we are struggling with doing a spinning hook kick, one of the best things to do is to work on our basic side kick.  Focus on the basics is a recognition of the importance of proper foundational support systems to become good at anything we are doing. 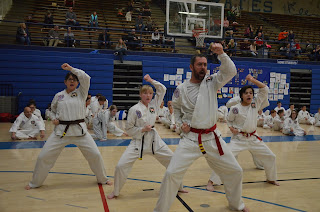 This focus on basics can be carried to any goal or resolution we may have in life.   If we are trying to get better grades in school, or get a promotion at work as a resolution we should look to the basics of our study, or look at what makes us good at what we do and focus some energy on things that we already know and do well.

Whether a New Year’s resolution is to lose weight, get a promotion or get in better shape, some of the fundamental learnings from our MSK martial arts training can be used to have a better success rate than the typical 8 to 12 percent.  Breaking things into small manageable pieces, holding yourself accountable and putting energy into our goals by focusing on the basics are fundamental to successful change.

Good luck on your resolutions and Happy New Year!
Posted by Colorado Taekwondo Institute at 9:14 AM No comments: 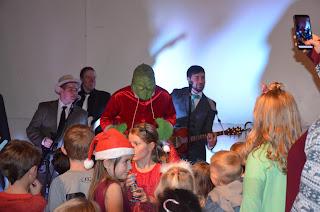 Special thanks to everyone who helped stage this year's CTI Christmas Party!
Posted by Colorado Taekwondo Institute at 9:05 AM No comments: 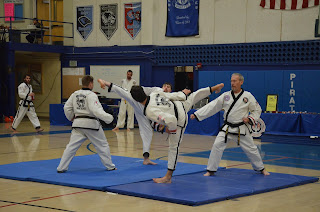 Students and instructors from the Colorado Taekwondo Institute came together to celebrate the founder of Moo Sul Kwan and the American Martial Arts Sports and Education Association at the 20th Lee H. Park Team Championships.  Great Grandmaster Park brought the unique gift of Moo Sul Kwan martial arts in 1969, to the United States.  Since then, thousands and thousands of people have benefited from someone in their family who trained in Moo Sul Kwan and the AMASEA.

Presented by the Grandmaster and Master instructors of the CTI, the 20th Lee H. Park Team Championships was dedicated to all of the parents, family members and friends of the CTI,MSK and the AMASEA.

The action began at 7:00 AM with black belt competitions in staff sparring, black belt poomse, team kicking and one-steps / self defense.  Click here to see some photos from the day.

Students of all ages and belt levels followed the black belts with their own dynamic team competitions! Besides poomse, there were also the Basics Challenge and Most Kicks in a Minute events for the younger students.