I have been lucky enough to participate in several high level academic competitions, and have undoubtedly related my academic success to discipline obtained from training at the Colorado Taekwondo Institute (CTI). After three years of Middle School and close to ten years at CTI campuses I have ascertained a noticeable difference between adolescents enrolled in Moo Sul Kwan Taekwondo and those who are not. 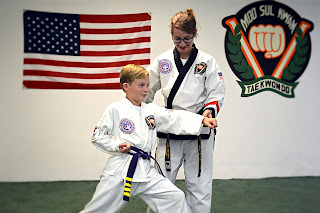 A few notable differences constitute self restraint, respect for authority, resourcefulness, and level of focus. All of these qualities help forge an efficient and independent learner both in information retention and success on independent schoolwork.

During extended lectures, or exams, the self-control taught at CTI Campuses is important in order to maintain focus and avoid distractions resulting in overall success in the areas. In my P.E. class multiple student redirections can be observed with little effect on the student’s behavior, these constant redirections are the main cause of the inefficiency of the class to make progress.

In a CTI classroom, each student's respect for the instructor's directions is the main reason why so much content can be outlined in the typical one hour time frame.   Any success I have had on a multiple week project, I can relate to the work ethic and independence I have gained from CTI Taekwondo. In the CTI martial arts classroom, the instructors can only make suggestions to their pupils, it is up to the student to realize it is how much work they put in that determines their final level of skill.  Acknowledgement of this concept has helped me on many major independent assessments where it is up to me whether to produce quality work or not.

Overall the concepts and character traits obtained from CTI Taekwondo--self restraint, respect for authority, resourcefulness, and level of focus--help create a successful learner.
Posted by Colorado Taekwondo Institute at 3:38 PM No comments: