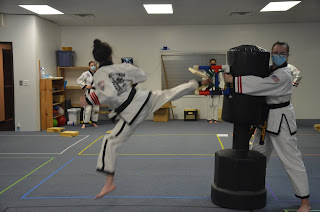 267 students and instructors of all ages and belt levels competed in Poomse, One-Step Sparring, Breaking, Target Kicking and more in the exciting two day event.  This was actually a hybrid event, where many students competed on line from Colorado, Missouri, Kansas, Ireland and Utah.  At the same time, students competed from three different CTI Campus locations, depending on what division they were in.  There were Moo Sul Kwan black belt judges at each CTI Campus, and a panel of MSK judges online for the remote competitors.

Moo Sul Kwan / AMASEA Black Belt competitions took place on Friday evening at the Westminster Campus of the CTI.  There were many highlights in poomse, one-step sparring, staff poomse and breaking.  Saturday morning through the early afternoon saw students from white through red belt compete well in their individual divisions.  Competitions took place at the Green Mountain, Golden and Littleton Campuses of the CTI and online.

Posted by Colorado Taekwondo Institute at 4:00 PM No comments:

Modesty is an important part of life, and can have a large impact, both positive or negative, in your day to day success. At school, work, Moo Sul Kwan Taekwondo, and many other places, an attitude of modesty or lack thereof will determine your reputation. Whether it be a good reputation or bad, the level of modesty you display will be one of the biggest determining factors. 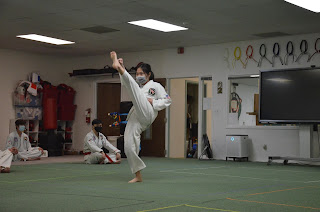 Throughout my career, I’ve worked with both modest and humble people as well as immodest or arrogant people and it’s shaped how I want to present myself as a leader in my industry. As a Naval Officer, the finest officers I served under were the epitome of humble and modest in their actions, and they fostered a truly positive command climate. The arrogant officers, on the other hand, not only created a toxic command climate, but also in the aviation community created a very dangerous environment in which the likelihood of a mishap was far greater. Currently as a civilian, I’ve seen firsthand how an arrogant team lead can cause a significant decrease in productivity and an increase in errors with people’s work.

Outside of the work environment, a modest attitude can really help with various relationships in your day to day life. Specifically with MSK Taekwondo, being a modest, attentive student will break down many barriers to learning and allow you to reach your full potential as a martial arts student. In other areas, being modest and humble will lead to more and richer friendships. If you constantly talk about yourself in a manner that comes off as bragging or insensitive to those around you, people will not want to associate with you. This is another area I’ve experienced firsthand, both with a friend of mine who constantly brags about herself and with myself inadvertently coming off as arrogant. In my case, it was completely unintentional but still threatened some very close friendships.

At the end of the day, you choose how you want others to see you, and adopting a humble, modest attitude will help you be far more successful in your day to day life than allowing yourself to be arrogant. The latter can be so off putting to those around you that you will likely drive most people away, whereas striving to be humble will make people gravitate toward you and want to help you succeed in whatever you try to accomplish.

Posted by Colorado Taekwondo Institute at 2:57 PM No comments: