Moo Sul Kwan Summer Expo XXXIII brought many surprises, lots of action, and was one wonderful weekend to remember!

This was the sixteenth different location in Colorado, for the Summer Expo, and it was incredible!  Participants stayed and trained at the Keystone Lodge and Conference Center where everyone enjoyed first class attitude and service from the resort staff.  An absolutely beautiful backdrop to the three days of intense training that everyone enjoyed. 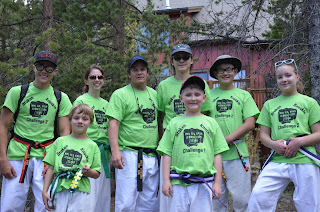 Classes began on Friday evening after opening ceremonies which included demonstrations from CTI Campuses with the Expo XXXIII theme, "Moo Sul Kwan's for Everyone!"  There were classes in sparring, poomse, one-step sparring, breaking, basics, falling and throwing, exercise, target holding, self-defense techinque and many more.

Saturday began nice and early for the black belts.  GM Sautel worked them out for a nice start to the day.  Red belts then followed with a early morning workout, with morning classes for all belt levels and ages that went until lunch time.  During the day there were also classes for the parents and friends of MSK.

On Saturday afternoon, the second year of the Broken Knuckle Challenge took place.  This year the competitors were mixed according to age and belt level and placed on teams.  There were also two Parent Teams that competed in the Broken Knuckle Challenge!  This was the very first year parents were on the race - and they did an outstanding job.  Teams made their way through the course completing the different challenges, pushing themselves to their limits to get through the tasks, then helping their teammates do the same.

The Expo Saturday Evening Banquet was fun and full of surprises.   After the nice dinner there was Grandmaster Hildebrand singing, a few awards, some CTI Movie Trailers, and the fun music of Moo Sul Rock.  The 300 banquet attendees of all ages had a festive time.

Sunday morning didn't find the Expo slowing down.  The well-worn Moo Sul Kwan black belts and red belts were up and at it at 6:00 AM working on sparring training and staff exercise....with several starting practice even earlier.

There were classes for everyone beginning at 8:00 AM and everyone did a fantastic job going strong and squeezing every last drop out of the Expo until the very last class of the day.

During the closing ceremonies, the top three BKC II winning teams were announced, everything was cleaned up and everyone said their goodbyes - until the next time!

Check for pictures on Facebook and our photo albums on the website.
Posted by Colorado Taekwondo Institute at 11:30 AM No comments: