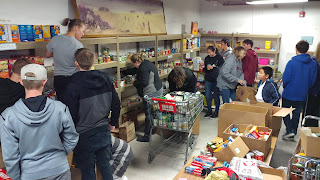 Being part of the Colorado Taekwondo Institute also means being part of the larger community. During the 11th annual CTI Food and Clothing Drive a hard working group of students went out to local neighborhoods and collected items for those who are less fortunate.

That morning, our large group gathered at the Green Mountain Campus despite the chilly forecast.   Everyone was excited to get out and collect as many items as possible. Everyone was paired up with a driver and some younger students. After each group had been assigned a section of neighborhoods, we all set out.

It was so much fun to see our junior students so excited to go out and collect food to help those outside of our school. The little ones in our group were especially excited to be near their own neighborhoods. They wanted  to have a competition to see which group in our car could collect the most items.  I agreed, but of course they wanted to pick the teams.

Because of their self-control and respectfulness, we mostly let the younger girls do the talking at the houses. They were very good at telling people where we were from and what items we needed.  Even near the end of the morning when everyone was getting tired, our  group was still upbeat, positive and trying to squeeze in every last house.

When we got back to the Green Mountain Campus, I was amazed at how much food people had collected. When our car pulled in, there were already mountains of cans scattered throughout the parking lot. As other groups returned with their bounty of items, everyone would rush up and grab armfuls to be sorted into piles. After everyone had returned, we all began to load the food up and deliver it to the King's Cupboard Food Bank. We also sorted more for the Jeffco Action Center. Contributing to this large task made me think of all the people we were able to help.  It was definitely the highlight of my month.
Posted by Colorado Taekwondo Institute at 2:18 PM