Why Should My Kid Start Martial Arts?

Traditionally, Taekwondo, Karate and other forms of martial arts have been used to pass down generation to generation. Although the main use for martial arts, such as Taekwondo and Karate, were used as self defense, meditation, and physical conditioning. Modern Taekwondo and martial arts programs are used for similar purposes. 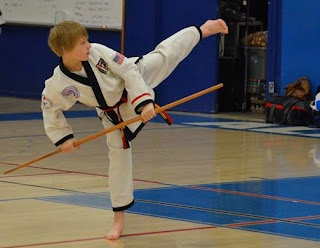 Martial Arts Programs have obvious benefits towards self defense. Traditionally, the word Martial is appropriate to combat. Thus, Martial arts programs put together organized combat with street skills and self defense. A large percent of Taekwondo or Karate training involves self defense. Self defense in the Colorado Taekwondo Institute and martial arts as a whole does not limit someone’s ability by giving a set of moves for your child to learn without any knowledge behind the move; similar to the “robotic approach”. Instead, CTI and martial arts schools encourages students to think for themselves and learn the moves and the ideas and concepts behind them. This develops children's and adult’s ability to think independently with autonomous intentions. Of course, in a street situation, 90% of what is important comes from this self reliance. One can know the moves, but without knowing where to use them, they are useless. The teachings of CTI involve training of when and where to use their moves (Which complements our motto “Self Control before Self Defense”).

Meditation
A walk through the hallways of a martial arts school may be intimidating at times. Children yell with the power of their punches and kicks, as sweat flicks across the room; yet, there is something very meditative about taekwondo and Martial Arts Programs. The Generic idea behind meditation involves one humming the the sound of nothing with the light of a candle flame. Yet, Psychology Today defines meditation as “the practice of turning your attention to a single point of reference. It can involve focusing on the breath, on bodily sensations”. Martial Arts themselves are aimed towards mastering the movement of one’s body; knowing where every part of your body at once is required to have an objective focus. This intense focus calms and soothes the mind after every martial arts class. Not to mention the release of anger and anxiety after a Martial Arts class. Martial arts programs are legendary for calming the mind, and creating a rational and soothing atmosphere.

Physical Conditioning
Traditionally being a form of combat, taekwondo and karate both have thousands of years
worth of exercise and conditioning. The very reason Martial Arts are so good for the physical body is the fact that they are developed and lie on thousands of years worth of studying and working out. Not to mention, CTI instructors prove to push their students so mind limits are often eroded down to a strong form of perseverance. Children learn what limits they can ignore and what they must pay attention to to avoid injury or trauma.

Leadership and Initiative
Martial arts schools train children to have the character of a leader and initiative of an adult. Often times, children who participate in a martial arts program learn to think independently in various practices such as sparring and self defense which both require full attention from one’s mind and intuition. Learning independent thinking helps the child develop initiative where they think for themselves. CTI’s teachers put a lot of trust in their students so that the students are able to carry on their requests.

With this being said, CTI involves 5 tenets that each student lives by:


These tenets fully wrap up every benefit of martial arts schools that teach Taekwondo or Karate.