By Cathy H., parent of a student at our Littleton location 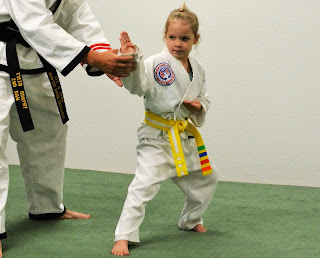 "My daughter has autism and intellectual disabilities. A year ago her pediatrician recommended Taekwondo training to help with her low muscle tone. I began my search for a place that would embrace her differences and allow her to have fun. I found Colorado Taekwondo Institute through a review that spoke highly of them with regard to working with special education children so I gave it a try.

CTI has been her home away from home. She feels welcome and empowered. She has been going two days a week for an entire year. The black belt instructors are patient, kind, and encouraging. She has also been mentored by a red belt who has been a godsend. The mentoring sessions are weekly and free. My daughter looks forward to her mentoring sessions. She comes home after class very happy.

They also have an annual family review to discuss the positive aspects of having your child in class as well as discussing goals. This had such a profound and lasting effect on my daughter. She still has the butcher paper they wrote these items on hanging in her room.

CTI treats my daughter with the same respect they offer to all the participants. They expect the same behavior and activities from her that they expect from all the participants. They understand her disabilities, but instead of focusing on her limitations, they let her tell them when she feels she can’t do something. Surprisingly, she has never suggested that she couldn’t do something. She trusts her instructors because they have shown themselves to be trustworthy. She sometimes needs a little convincing, but she has risen to the occasion and is now testing for her yellow belt.

I have to say that the most impressive and surprising part of our CTI experience has been the impact it has had on me. I am acutely aware of my daughter’s disabilities and have sworn never to limit her because of them or to use them as an excuse. CTI has shown me that I was in fact using her disabilities as a crutch. They have shown me that my daughter is capable of more than I had ever imagined. Will she ever be a rocket scientist? Before her karate training at the CTI, I would have said no. Now I say, if she works hard enough, she can do anything. Thanks CTI!"

Thank you Cathy for your kind words and for your support!!
Posted by Colorado Taekwondo Institute at 3:45 PM