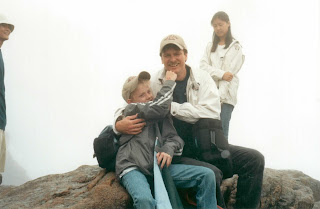 I’m pretty sure it was March 17th, 2009.  That was the day I dragged my six year old son to the second floor dojang in Aspen Park for his first Moo Sul Kwan Taekwondo lesson.  His mother and his sister and his teachers at the Aspen Park Montessori school had been telling me that he would not do as he was told – which was news to me because he always did what I told him, but regardless - and with a three week parents only vacation to Italy on the horizon – to be supported by grandparents watching my son and his older sister – I thought it wise to enroll him in some activity that might instill some respect for authority.  Years later when I think of parents enrolling their tigers and juniors for just such a purpose I can’t help but feel for Mrs. Lindner.

And so began the more than eight year journey of raising a blackbelt.   But what really does that mean?  What does it truly mean to have that amazing young fourteen year old man who has achieved that goal and is now enroute to others?  The first thing is the sacrifice that we as his parents have made. It’s not cheap.  And there is a tremendous time commitment.  But to have seen him grow in his martial arts, and to see how his martial arts growth has molded him as a young man has been a joyful experience.  I guess one of the first and most poignant examples of how it has molded him was to see him as a leader.  He plays football in the fall.  And last season was the first time we saw him basically take control of his team.  Before the games and at half time when the entire team huddles on the field and one of the players is in the middle of the giant huddle shouting cheers to psyche up the team, it was our son who was the one in the middle of the huddle shouting the cheers, “Who are we?!?!?!?  MUSTANGS!!!!, What’re gonna do?!?!?! WIN!!!!”  It still chokes me up to think about.  And I have absolute certainty that my wife and I have the CTI and Moo Sul Kwan to thank for the precocious maturity and self confidence that our son shows.

And what else does it mean to raise a Moo Sul Kwan Blackbelt?  It means raising an exemplary kid.  Yes, he sometimes still leaves his socks on the counter and getting him to do the dishes is often like pulling teeth, and we refer to cleaning his room as “mowing’ his room.  But we almost never have to bug him about his grades – He is an A/B student almost without trying.  And he stands up for what’s right without even thinking about it.  Recently at school one of the members of his “squad” (as a group of friends is apparently known these days) was the attempted victim of a bully (yes, there was a girl involved).  And fortunately for my son’s friend – and unfortunately for the bully – this occurred right in front of my son.  From various accounts, without even thinking about it, and only using the amount force required, my son subdued the bully until the situation was defused.  That again showed the precocious maturity and self-confidence to which I credit Moo Sul Kwan.  My son didn’t feel the need to fight.  He had nothing to prove to anyone.   He simply defended his friend until the threat was gone.

Raising a black belt – there is no manual or instruction booklet.  But when I think back on the six year old ornery kid who barely came up to Grandmaster Sautel’s belt, and then I think of the amazing young man who at fourteen years old is now taller than me, and then I think of how incredibly proud I am of the young man he has become, well, all the time and money and effort through the years hasn’t been spent. It has been invested.  And I dare say it has been invested wisely.