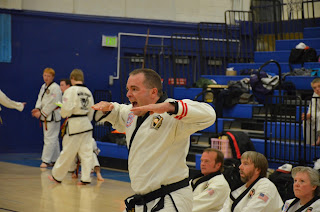 The kihap is known to anyone who is familiar with Moo Sul Kwan Taekwondo as the yell that comes with a strike or kick at the point of impact.  The kihap has many benefits in MSK Taekwondo including helping produce more power in a technique.  The kihap can help you to call for help or draw attention to yourself if you are being attacked.  The kihap might even scare you attacker away.  The kihap can also help distract your opponent as a fake for a moment to allow you to land a strike or kick.  The kihap tightens up the core which helps stabilize and defend against and prevent injury in an attack situation.  The kihap also acts as a method to gain focus and psych yourself up for giving your maximum effort.  The extra focus and energy helps get even more power while helping you breath as well.  All of these benefits are taught to us, but have any of these benefits ever truly been proven.

Some studies have been done that prove that indeed the kihap can indeed help get more power out of a technique.  The studies not only involve Taekwondo martial artists, but also athletes from the game of tennis and just normal people testing their strength.  The game of tennis doesn’t use the kihap per se, but is using another similar breathing technique called grunting.  Grunting is similar to the kihap in that is tightening the core and helping breath by expelling the air from the lungs.

The studies with tennis, do indeed prove that grunting not only provides an increase in power, but provides other benefits.  The studies show that the power of the serves and forehands in tennis increase by 10%[1].  The extra power produced also doesn’t cause any more physical strain than not grunting[2].  This means that even though more power is being produced, the energy required is no more draining on the tennis player than if he didn’t grunt.  The grunting also seems to distract the opponent on each hit, reducing the reaction time[3].

The studies in Taekwondo show that roundhouse kicks have 10% more acceleration when a kihap is performed than without[4].  The kihap also is shown to be equally effective when used by more experienced martial artists or with a novice[5].  Not only are the kicks coming faster, but muscle strength is also increased by around 7%.

Anyone who has tried to break a board with and without a kihap can attest to the difference in power with using the kihap.  These studies put some hard evidence behind the personal experience we all have.  The studies definitely prove that we should not neglect the importance of the kihap when we need extra strength and power.