Learning Self-Respect and Respect For Others Through Taekwondo

To me respect means many things in many different ways.  The first of these is the flavor of respect that is accompanied by wariness.  But it is not merely wariness or fear.  One might be wary of a gale at sea or a forecast of several feet of snow in the mountains, or one might be wary of an opponent’s awesome defensive side kick.  But to do nothing about this wariness is merely to be afraid.  Rather, to respect something fearful one must take measures to mitigate the possible impacts.  In a gale on a boat at sea, the respectful sailor would change course to out run or avoid the worst parts of the storm.  And he would batten down all the hatches, reef the sails, run safety lines and wear a safety harness while on deck.  For the case of the snow storm in the mountains the respectful mountain man would stock up on food and water, and periodically shovel and plow to mitigate the chance of snow loads damaging the house or of being trapped or “snowed in”.   And if a generator was available the mountain dweller would wisely make sure that it had plenty of fuel and was in proper working order, before the storm.  And in the case of the opponent and his awesome defensive side kick the respectful student would avoid showing his front and avoid just “charging right in.” 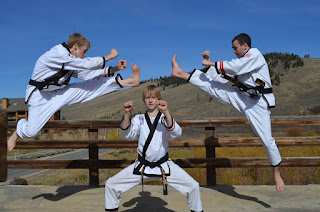 And still another type of respect is the one that comes with a sense of admiration.  But this is not merely to like or dislike.  Instead it is a sense of admiration that is accompanied by an appreciation of what is required to achieve that which is admired.  For example, one might admire a particular guitar player or singer, but unless one understands what was required for that musician to achieve their level of virtuosity it is very difficult to truly respect their accomplishment.  Similarly, one might admire what Bruce Lee or Jackie Chan or Jet Li does on a movie screen – even though movies are, of course, choreographed.  But unless one understands the level of proficiency required of a martial artist to go full speed and yet not injure his opponent it is once again difficult to really respect what these martial artists/actors are doing.  Which is to say nothing of the respect commanded by a 79 year old great grand master who does 2000 or more leg chops while teenage children of steel can barely walk after 200.

And the final flavor of respect that I have in mind is respect that comes with a sense of reverence. - a sense of holiness or destiny.  And this type of respect can be found and experienced in many different ways.  For example, someone who does not hold reverence for life and its remarkability might not have any reservations about building a deck out of wild harvested redwood.  But the student who holds a reverent respect for life and its myriad forms could likely only imagine that the appropriate place to see redwood is not in Lowes or Home Depot, but rather in an old growth forest.  And a similar sense of reverent respect must extend to one’s self.  The gift of life is not one to be squandered. And while there are many who abuse themselves with unhealthy habits (My family and I love the term “death sticks” from the second Star Wars movie when referring to cigarettes) the student who has a proper measure of self-respect must revere their body as the incredible gift it is.  It must be cared for and treated appropriately.  It must be nourished and kept fit.  And it also must be properly cared for when injured or ill.  And listened too.  By showing a reverent respect for one’s self the  student is first able to maximize the holy gift he was given – life itself. But also by showing a reverent respect for himself, the student is able to fully and truly respect life in all its forms, including his fellow humans.
Posted by Colorado Taekwondo Institute at 10:50 AM