There’s an old, well known story of a chicken farmer who found an eagle’s egg.  He put it with his chickens and soon the egg hatched. The young eagle grew up with all the other chickens and whatever they did, the eagle did too. He thought he was a chicken, just like them. Since the chickens could only fly for a short distance, the eagle also learnt to fly a short distance. He thought that was what he was supposed to do. So that was all that he thought he could do. As a consequence, that was all he was able to do. 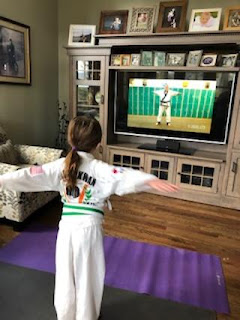 One day the eagle saw a bird flying high above him. He was very impressed. “Who is that?” he asked the hens around him. “That’s the eagle, the king of the birds,” the hens told him. “He belongs to the sky and we belong to the earth, we are just chickens.”  So the eagle lived and died as a chicken, for that’s what he thought he was.

Potential, this is what the eagle had in spades and was unaware of it.

Working through challenges in MSK Taekwondo will naturally result in personal advancements.  Challenges become stepping stones for unlocking our potential.  Potential, latent abilities or qualities that may be developed for future success, are unlocked through our awareness and effort. Every action such as mastering a movement or perfecting a technique create improved self-confidence and self-esteem.  Performing strong basics result in physical strength, reflexes, mental agility, muscle strength, and form a foundation upon which to release potential.  Overcoming challenges and seeing our potential released in MSK Taekwondo creates a strong personal character that naturally translates to our everyday lives.  The perseverance learned in MSK Taekwondo becomes a habit, allowing you to release your potential and succeed in all aspects of life. Releasing potential takes ongoing sweat equity, “Continuous effort is the key to unlocking our potential.”
Posted by Colorado Taekwondo Institute at 5:00 PM