The first time I read the Aims of Moo Sul Kwan Martial Arts, written by Great Grandmaster Lee H. Park, I was a new white belt student studying the CTI Student Manual in preparation for my yellow belt written test. The second aim reads: “Help students in identifying and accomplishing appropriate goals, developing a sense of self-esteem and confidence, in encouraging their desire for self-directed learning, and in expressing themselves as thoughtful individuals.” As a white belt, my goals were pretty simple: lose weight, get through all of the jumping jacks at the beginning of class without needing to rest, be able to touch my toes during stretches, and get the foot movement correct on Taegeuk Il Chang. I didn’t really understand how martial arts could bring me better self-esteem and confidence, but I was hoping that was true, because I needed it. Going to class was intimidating. Being the only white belt, and the newcomer who didn’t know anyone, was a little bit scary. Looking back on it, I can see that most of these feelings were due to my own self-esteem and confidence issues outside of the dojang. 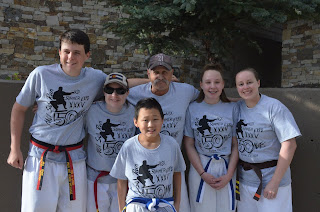 Reading that second aim struck a chord, and I hoped that some of it would prove to be true for me.  It wasn’t long after I was promoted to yellow belt that I started to settle in to my place in class. My instructor had always been wonderful and supportive, but I was starting to develop a camaraderie with other students in my class too. A couple of the black and red belts had taken me under their wing so to speak, and were encouraging and friendly, helping to guide me in my training. It felt like I was starting to get some people in my corner. I didn’t have to motivate myself to go to class anymore- I wanted to be there. I was happier when I was there, and I was definitely less stressed when I left. I was starting to notice small strides toward my first goals of physical fitness, which motivated me even more to keep at it. I even broke my first wooden board, which was something I didn’t think I’d ever be capable of doing. That feeling when my foot went through that board for the first time was amazing.

Around the orange and green belt level, I had become 100% committed. Moo Sul Kwan Taekwondo had become my passion. Suddenly my goals had developed from small strides in physical fitness to big “pie-in-the-sky” goals. Sure, I still had short term goals. Like fixing my front kick foot position, getting the pivot correct in my side kick, reaching my next belt. But I had bigger dreams too. Like getting to the purple belt level so I could start going to upper belt training on Saturdays, join LeAD team, be on the demo team, make it to black belt, be able to travel with the Black Belt Team during a World Tour, become an instructor and have my own students. I knew in order to reach these goals, I needed to keep at it. I needed to push myself harder than I ever had, and not waste any opportunities for training. So that’s what I did. I never missed an event, and it was very rare that I missed a class. I was more driven toward these goals than I had ever been before. And somewhere along the way, I needed to go down a size in my dobok pants.

I realized recently, a little more than three years since I first bowed in to class, that many of these “pie-in-the-sky” goals have either become reality, or are now within my reach. My self-esteem, confidence, and physical fitness are like night and day from where I was in 2016. I’m in the best physical health of my adult life, and am happier than I have been in a very long time. I used to be the new white belt who didn’t know anyone. Now I’ve been fortunate enough to have met some of the very best friends I have ever had through the CTI. The first time I read that second aim of MSK martial arts, I admit I had some doubts on whether or not any of that would ever hold true for me. Not only has it held true, but it’s gone above and beyond anything that I thought would be possible. My instructor, Grandmaster James Sautel, will ask us on occasion to think of where we could be in a year if we keep pushing as hard as we can every class. It only occurred to me recently that he is referring to Aim #2. I can’t wait to see what the future holds for us.
Posted by Colorado Taekwondo Institute at 4:14 PM