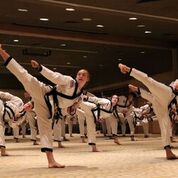 With today’s social media, teenagers are spending more time online than they are with other people. They spend hours on their phones or computers, sitting down with their heads bent forward. This puts them at risk for physical, mental and social issues.

Physically, teenagers are more sedentary today. An article in Time Magazine discusses how the activity level of children changes in the teenage years and teens are becoming just as sedentary as adults over 60. This decline in physical activity has increased the obesity rates in schools.  Moo Sul Kwan Taekwondo is a good option for teenage martial arts to help combat obesity and increase fitness because it provides both cardiovascular and muscular endurance.

Mental and social effects on teenagers today are greatly influenced by the media and social sites. This allows for constant images and messages to consume their time, often causing low self-esteem and depression. Prior to the rise of social media, kids who were bullied at school had a chance to get away from it during after-school hours and weekends. With smartphones today, bullying can happen at all hours, with little relief.

One way to combat these negative effects of new technology is to have teenagers be involved in sports, physically removing their phones from them during practice. Taekwondo places just as much importance in mental and social education as it does on physical fitness. Each class provides a great workout, with continuous learning, keeping the classes stimulating and fun. MSK Taekwondo supports respect and discipline in class and out, training students to be kind, upstanding citizens in their community

The Colorado Taekwondo Institute is much like an extended family. Social gatherings, events outside of class, and camps offer the students more time with other people and away from their electronics. Taekwondo is a great option for martial arts teens because it allows a support system for social and mental growth, and builds confidence and leadership skills with physical achievements.
Posted by Colorado Taekwondo Institute at 3:51 PM