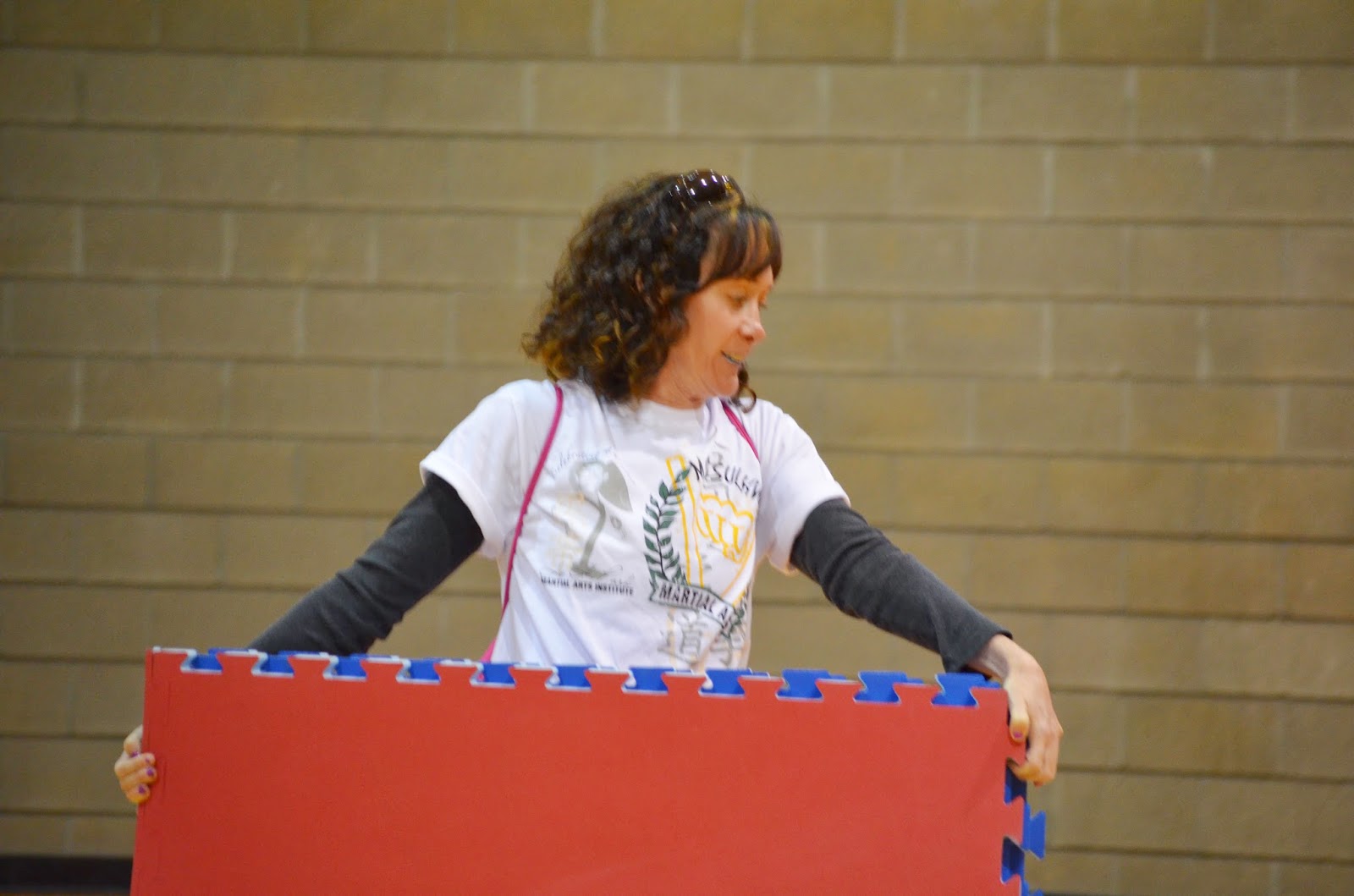 I have been doing Moo Sul Kwan Taekwondo for a little over three years now.  When I started at the Westminster campus, I thought it would be something fun to do with my kids, something we could share.  I did it because it looked like good workout and I am not the kind of person who likes to go to the gym.

When I started my friends looked at me like I was crazy.  Moo Sul Kwan Taekwondo is something that you sign your kids up for, not something that a thirty-five year old woman signs up for.  When I started training at the CTI, I did not think that I could actually do it.  It never occurred to me that I might be able to be a real Black Belt someday, or even a Purple Belt for that matter.  I thought I would do it for a while, set a good example for my kids, and get in shape.

When I started at the Colorado Taekwondo Institute I never imagined that I would love it.  That I would spend six weeks recovering from surgery sitting in the back of class wishing that I was up there doing jumping jacks with my classmates.  That I would leave my family for five days to drive to Missouri, with people I hardly know, just for the opportunity to learn more and take classes from a Great Grandmaster , Grandmasters and Master instructors.

As I was preparing to leave for AMASEA National Convention I was talking to the Principal of my kids’ school and told him that I was going to be out of town for a few days.  I told him I was going to a Taekwondo Convention in Missouri.  I will never forget the look of shock on his face when he realized that I was going because I do MSK Taekwondo, not because my kids do it.  I could not tell if he was impressed at the idea, or thought I was crazy.  Either way, I was proud of myself.

When I arrived at the Green Mountain Campus (in Lakewood, CO) and we were preparing to leave I was terrified.  Could I do this?  Was I ready to push myself that hard?  The National Convention was something that the Upper Belts did.  Something I heard them talk about in class, but had never really thought much about actually doing myself.  I still remember my first class.  I stood in the front of the class in my starched white uniform and I was sure that the people around me could hear my heart pounding in my chest.  I was petrified.  Would I be able to keep up with those around me?  Would I make a fool of myself?  The jumping jacks started and there was no looking back.  Then the day came when Master Albrechtson told me I was ready to test for my Yellow Belt.  Somehow the thought of testing never even occurred to me when I signed up.  I hadn’t studied for a test since Grad School, which was more than eight years prior.  Could I still do it?  I had heard the physical test was grueling.  Would I make it though?  I had to trust that of my instructor thought I was ready that I was.  I went into the test and I survived.  Maybe I could do this Taekwondo thing.

We arrived at Southeast Missouri State University and we prepared for our first session of Convention 2013.  That same feeling washed over me that I felt standing in class that first day, and lining up for my first belt test.  Could I do this?  Was I right to come on this trip?  To take this journey?  Once again, the jumping jacks started and my tension began to fade.  Even if I couldn’t do it, how would I know if I didn’t try?  What would be worse, to fail or to never try?
By Taryn Dwyer, purple belt

When I started MSK Taekwondo I was intimidated to try new things, to push my limits.  At my Yellow Belt test we had gone through everything we learned and the upper belts were getting out their boards for breaking.  I was done.  I could just sit back and watch them.  Wrong.  It was announced that each CTI Campus could pick someone and let them attempt a break.  I heard my name come out of Master Albrechtson’s mouth and my heart stopped.  Just when I thought I had pushed myself as far as I could go, he wanted me to take one more step.  Could I do it?  Surely no one would think less of me if the board didn’t break.  Right?  I got a crash course in breaking and took a deep breath and kicked.  The board broke!  I felt a surge of adrenaline like nothing else.  If I could do that what else was this crazy, thirty-five year old mom capable of?

The second day of Convention rolled around I looked at the schedule and realized that I had not one, but two sessions that day with Great Grandmaster Shin.  His classes had become legendary and I realized that he was going to push me beyond any limit that I had imagined.  Since joining CTI I had survived five promotion tests, I had taken up running and completed four half marathons, I had also come back from abdominal surgery.  I was stronger than I had given myself credit for and I was going to enter his classes knowing that it was going to make me even stronger.  I stood right in front of him and bowed in. These sessions on his mat did not disappoint.  They were physically and mentally challenging, and I survived them.  I even left the first session looking forward to the challenge of the second class.

Convention made me realize that I may have started Moo Sul Kwan Taekwondo to share something with my kids, but over the last three years it has evolved into something more.  I still share it with my kids, but it is also something that is mine.  When I am working out I can leave all the other stuff going on in my life at the door.  Taekwondo is my time to focus on me and no one else.  I want to be pushed harder, to be challenged more, and to go farther.  When I started Taekwondo I looked at the Black Belts with respect and admired how hard they had worked to get where they are.  Now I look at them and I want to be one of them.  I want them to teach me what they have learned and I want to inspire others as they have inspired me.  I may have been a “Wild Card” going into Convention, but I came out as someone to just maybe keep an eye on.
Posted by Colorado Taekwondo Institute at 1:30 PM