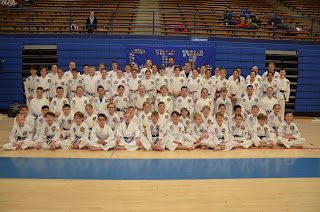 In the martial art of Moo Sul Kwan Taekwondo, the uniform is very important to the practice, like many other martial arts and sports in general.  The uniform is important in aspects such as discipline and respect, along with smaller details like rank. To start, the uniform is a method of, and represents the discipline of the sport.  Everyone is required to wear a uniform, with few to no exceptions, therefore a method of discipline. Another reason for a uniform is that it shows respect. Wearing a uniform when practicing MSK Taekwondo shows respect not only to the sport itself, but also the people working out around you, showing that you are dedicated to the sport and upholding the Moo Sul Kwan values while wearing it. Wearing the uniform also shows respect to the instructor, implying that once you put it on, you are ready to learn and practice the martial art. The uniform also shows rank, with a plain white uniform with a colored belt for training, under black belt students.  MSK Black belts wear a special, embroidered uniform with black lapels and stripes on the right sleeve showing the dan. The uniform is also part of the history of Taekwondo, relating all the way back to when Taekwondo and similar martial arts were practiced and taught in the Korean military. The Taekwondo uniform we have today was originally derived from the military practice uniform, and has changed over time.  Wearing the uniform also pays respect to the heritage of Taekwondo, relating all the way back to Korea.

The belt is also included in the uniform, possibly being one of the most important parts, used for showing rank as well as keeping the uniform fastened. The belt is an indicator of rank, with colors showing different ranks, with black being the highest. Once the goal of black belt is reached, the belt stays black throughout the belts, with embroidery showing the level of black belt.  The belt also is a huge part of the uniform in terms of keeping it tidy.  The belt ensures that the lapels of the uniform are held in place properly, keeping the uniform looking clean and, well, uniform.  One final point is to make sure to always keep the uniform clean. If the uniform is dirty, then it is disrespectful to the sport and the instructors.  Because the uniform is white, it is easy to tell when it is dirty and needs to be washed, so make sure to keep it clean! Overall, the uniform is a huge part of the martial art Taekwondo, possibly one of the biggest, its importance outweighing almost any other aspect.
Posted by Colorado Taekwondo Institute at 3:23 PM