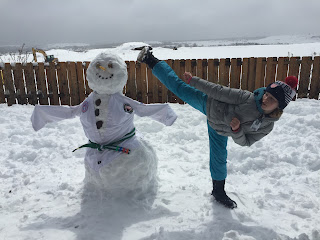 One of the foundations of Colorado Taekwondo Institute is continuous learning.  This is evident in the fact that once you become a black belt you are not considered a master of Moo Sul Kwan Taekwondo, but rather a master of the Basics.  Learning never ends and you can never know it all.  I think that this is one of the things that draw students of all ages to the martial arts, and to MSK Taekwondo in particular.

The CTI does an amazing job of fostering this desire to always be learning by offering its students numerous opportunities to learn.  Not only are there classes held five days or more a week, there are tournaments four times a year, a 3-day Expo in the Summer, as six-day Camp MSK and even other camps and clinics.  In addition, the CTI occasionally holds seminars that allow students from all of the campuses to come together to learn more about a particular aspect of their study.

Recently, the CTI held two such Masters Seminars at the Green Mountain Campus, Poomse & Target Kicking.  The event was advertised as an event for “all belt levels”.  As an adult lower belt myself, I am often nervous about such things because I have an unfounded fear that I will arrive the morning of the seminar and find myself in a room of upper belt students or a room of Tigers.  This was not the case at all.  The participants in the seminars ranged from brand new Tigers, to adult white belts who had just started their studies a couple of weeks prior, to master instructors.

We started the first seminar much like we start every class and every promotion test, with warm-ups and stretching.  Then we began the Poomse part of our training for the day.  I honestly had no idea what to expect.  I did not know if the instructors were going to break down our highest Poomse with us or if they were going to teach us new moves.  What I was not expecting was for the instructors to start breaking down the ready stance, or Chunbi Chasi.  The second rule of Poomse Training is “In assuming the ready stance be calm, cautious, and courageous.”  I had memorized it months ago and I recited it in promotion tests and in class on numerous occasions, but I had never really given it much thought.  We listened to Grandmaster Sautel speak about it and then as a group we practiced our ready stance.  And then we practiced some more.  It really made me stop and think about what I was doing and realize that there really is a reason for everything we do in class.

After a few more practice rounds we split into groups based on age and belt rank and were assigned a black belt instructor to work with.  I really enjoyed this part of the seminar because not only did we get to meet other students who were at the same point in their studies as we were, but we got to work with other instructors.

The next part of the day focused on Target Kicking.  After a second warm up and some more stretching, we were again broken into groups based on age and belt rank.  This part of the day was slightly different.  We stayed in the same groups, but we rotated through different stations and got to work on different skills with different black belts.  We started working on some basic kicks that I had done in class before and learning how to hold the targets for our partners.  It was something I really enjoyed learning about because now my kids and I can practice at home together.  We also got feedback on our form and learned how to improve out accuracy and power.  We then progressed to some more advanced kicks that were new to me and challenged me a great deal.  It was great to be able to spend so much time dedicated to an area that we usually do not get to spend a whole lot of time on in class.  We ended this part of the seminar with a demonstration by some of the black belts of some advanced breaks.  It was motivating and entertaining at the same time.

Overall the seminars were an amazing experience and I am so glad that I pushed myself and attended them.  I returned to class the following week feeling energized and reinvigorated and anxious to incorporate what I had learned into my work in class.  If you were not able to attend the Poomse & Target Kicking Seminars, or did not know if they were really right for you, I highly recommend that you make a point of attending them the next time they are offered.  It is a great opportunity to learn more about Moo Sul Kwan Taekwondo and improve your skills beyond what you would be able to learn just by attending class.  I would like to thank CTI for continuing to offer programs that push us to become stronger athletes and better people.
Posted by Colorado Taekwondo Institute at 10:27 AM