"Back to the Future II" 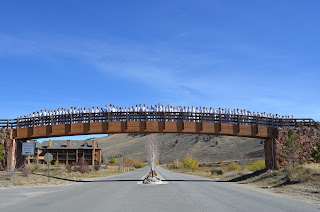 Symposium is one of my favorite events of the year- like Expo, it's a weekend dedicated to hard work, sweat and breaking down our advanced techniques.  But unlike Expo, where there's the race and more classes focusing on basics, our black belt martial arts convention is where the upper belts really start to feel the pressure being put upon them to become leaders and hardworking black belts.

"This weekend is about work," Grandmaster Sautel told us on Friday. And he was right.  We started off the classes with all of the upper belts and black belts warming up together, led by Mr. Kikhia.  Once we were loose and ready to go, we jumped right into breaking down poomse, move by move.  Like chipping away at a statue, the instructors chipped away at each detail of the poomse moves, getting everything from finger positioning to precise counts and timing on each move.

The theme of the weekend was "Back to the Future II". And as much fun as the allusions to the classic movie were, the message was clear- everything we were learning, every  move we were tweaking, fixing, adjusting, was to pave the way to create a more unified idea of what each poomse and one step was to look like, and in turn, create a more unified school.  If each instructor taught each poomse exactly the same way (same count,  same moves, etc) our group would become that much stronger.

It was amazing breaking things down and getting to the bare bones of the poomse and one steps.  But what was even more amazing was the anticipation of seeing how the upper belts, instructors and Master instructors used what they gleaned from class in their daily training, and how they would apply it in their classes, whether they were teaching, assisting or working out.

The second day of classes began with a CTI Power Taekwondo session.  If you're an upper belt and you've not yet had the chance to experience a CTI Power Taekwondo workout, I highly recommend doing it the first chance you get.  Nowhere else will you get as amazing an experience as weaving and dodging past black belts, all the while kihaping with all the spirit and power you can muster.  Kicking and stretching up and down the ballroom with the Master instructors, all the while being urged on harder by your peers; as far as mornings go, I wish all of mine could start with as much energy and dynamic power as that one.

That evening after classes was the banquet, the first chance of the weekend to unwind, relax and have fun.  "Moo Sul Idol" was two parts hilarious and one part pure talent- it really goes to show you what a talented, outgoing group we have at CTI.  Kids and adults alike, of all colored belts went up and sang their hearts out for the judges and the audience.  It was so exciting to see some of the shyer kids come out of their shells and sing in front of everyone.

The final day rose and began with black belts practicing staff poomse and one-steps, followed by a final class before the big promotion test.  As the testers went in to give it their all, the rest of the group came into the ballroom a final time for a huge sparring class.  Everyone had a chance to spar anyone they wanted, and later rings were created to allow the younger kids to try out judging sparring rings.  By the time we had finished, we had all been sparring for nearly two hours!

The test finished up, and we all rejoined together in the ballroom for the closing ceremonies.  Grandmaster Sautel and Master Sautel commended us for our hard work, and reminded us once again why we were all there- to be the very best black belts, instructors and leaders we could possibly be.  To take all that we had learned, and push it towards the future, not just for ourselves, or our individual campuses, but for us as a whole, the CTI family!
Posted by Colorado Taekwondo Institute at 4:11 PM