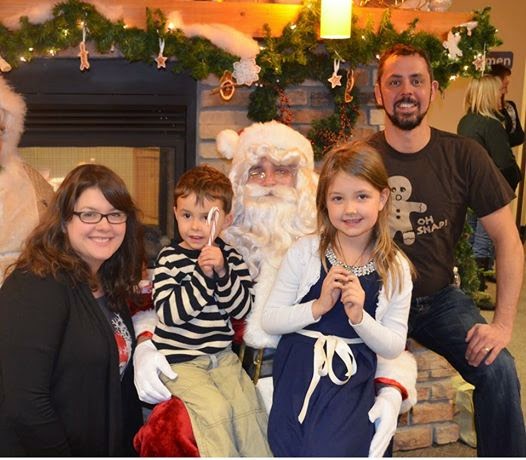 A very special time was had by all at our 2014 CTI Christmas Party.  From dancing CTI Elves, to CTI Elves-in-Waiting, to a visit from Santa Claus, there were so much fun that happened.  During the evening, the Dickerson Family, Sara Spery and Shekina DeTienne received special awards from the CTI family for all their help and dedication to the aims and goals of the CTI.  Also, Mr. Clayton Garner, 4th dan, received a plaque honoring his twenty years of training and teaching Moo Sul Kwan Taekwondo at the CTI.


Here is a special poem about this year's CTI Christmas Party, written by Ed Stanton of the Golden Campus, orange belt

This simple small gesture did seemingly say,
That we know and we care in our own Taekwondo way
The party was held at the perfect location
A church that is friendly, known as Faith Mountain

More rapid then front kicks
The courses appeared,
All who were hungry had nothing to fear.

Following dinner was great entertainment,
Dancing would come; you couldn’t contain it.

But first we needed to know who they were,
Those Christmassy elves all dressed up in fur

She named those in training
With the help of her buddy,
She and Mr Kikhia were really quite funny

With names such as "Stinky", "Sparkles" and such
We had a great laugh, it was a nice touch

Then music was played and the elves started dancing,
The music made fun, by the elves silly prancing

When what to my wondering eyes should appear,
It was Santa himself, without any reindeer

The elves started shouting and screaming and cheering
The place was a roar, it made hard of hearing

Sweaty the Elf shouted out “Santa”!
I think that he might have been hopped up on Fanta

The jolly old guy was dressed all in red,
He gave us a speech and we heard what he said
A peek at the crowd did surely show
That the kids where all happy, their faces aglow

In the main room, the band started playing
Oldies but goodies is what I am saying

Mr Ondrejko delighted the crowd
With a jazz trumpet
Which he played oh so loud!

After the dinner and dancing and elves
My family and I had to excuse our selves
For late nights and parties are fun to enjoy
But we had to rest our girl and our boy.

On my drive home with no elf in sight, I heard Santa exclaim
“Merry Christmas to all, and to all a good night!”
Posted by Colorado Taekwondo Institute at 5:03 PM