Martial arts are beneficial to people of all ages, but the long-term behavioral benefits are especially prevalent in the children who start Taekwondo at a young age and adopt the concepts of self-discipline, self-control and confidence. Children’s Taekwondo differs not in the way it is taught, or the types of techniques learned, a 3-year old child learning basics will do the same routine as an 14-year old teenager, or a 30-year old adult, but more in how the disciplines are picked up and what is emphasized to the student by their instructor.

In kid's Taekwondo, learning the martial arts techniques as a form of defense is still the main goal, but the focus for the younger children is the body control and mental discipline which is still being developed. Whereas for adults, equal parts technique and and discipline are taught to the lower belts to ensure success as upper belts, the children’s education is centered around mainly the concept of Ho-Shin, as well as the body awareness required in class. Large, overarching techniques such as low stances, objective focus and tight hands remain the same, but  the nuances in certain basics such as foot position in kicking or focusing before striking come later, once the children have hit the intermediate belts and begun to have the self-discipline required for more advanced techniques. 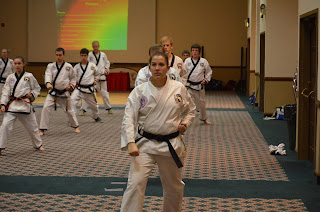 Until that point, the emphasis remains on the mental fortitude to become a successful black belt- developing children’s self-confidence, their understanding of their own bodies and how to control themselves. This discipline in class then carries over into other aspects of their lives, encouraging good behavior at school and at home, and making these children of Taekwondo almost like little ambassadors of our school’s tenets and beliefs. And creating the habit of having control over their bodies and minds allows for these kids to grow up and continue to grow and develop their skills as they progress through Taekwondo. In this way they also become leaders among their peers, even the ones outside Taekwondo.

Children’s Taekwondo is so much more than an exercise or a sport- it is a discipline, a life-long learning experience that will develop the child into a successful adult. Children, teenagers and adults can all benefit from martial arts in a myriad of ways; through the development of the body, mind and spirit, individuals can learn vital skills to prove as leaders. However, developing these traits early in children is the most beneficial in the long run, shaping them and their choices as they grow and learn about themselves, and blossom into ideal black belts and leaders of their generation.
Posted by Colorado Taekwondo Institute at 6:21 PM