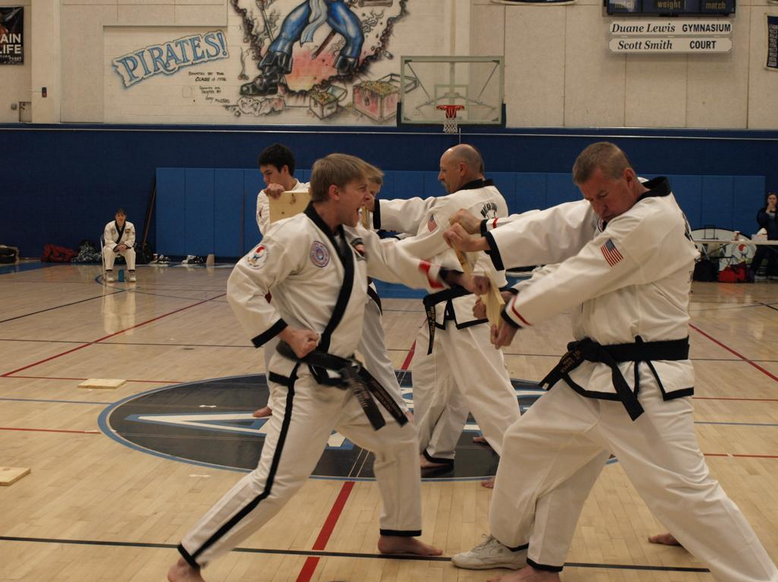 Last year at this time, my 6-year-old twin boys and I started Moo Sul Kwan Taekwondo at Colorado Taekwondo Institute – Westminster school.  The 40th CTI Super Bowl took place just five weeks after we attended our first class.    We were brand new white belts. We were just getting some basics down and had no idea what a tournament was like or what to expect.   Our instructors encouraged us to attend so we registered.

When we arrived at Alameda International High School we must have looked like deer in the headlights.  There were hundreds of people moving around in the gymnasium.  The energy level in the building was so high you could feel it as you walked in.  At that moment we realized, we had no idea what to do now that we had actually arrived.  That turned out to be no problem.  As we approached the sign-in table some very nice women asked us our names and told us to put out our hands. When we set our hands out they wrote a number on each hand, one in red, the other in green. The ladies then explained how the numbers would help us know where to go for our events.  After finding a place for our gear, we found a space to warm up.

Before long, it was time for the boys to perform their Poomses.  The kids were nervous but excited too. With two kids competing at the same time my wife and I had to use our man-to-man coverage but we were able to enjoy watching both our children demonstrate what they had been practicing at home for the last few weeks.   One of our twins is extremely shy and reserved.  Seeing the confidence and pride he exhibited when demonstrating his Poomse was an amazing experience as a parent. Best of all the boys were proud of themselves and of each other.  They worked hard, had fun, and found the experience of receiving a trophy for all their efforts pretty exciting as well.

After lunch it was my turn to compete.  My boys and wife enjoyed watching me demonstrate my Poomse and spar against other dads.  It was a great way to spend the day as a family.

Since last years CTI Superbowl, the boys and I have worked hard to reach our Taekwondo goals and have really learned a lot.  Our family is excited for this year’s Superbowl.  The boys are telling their friends and family they will be in the Superbowl again this year.  They know if they keep working hard, participating in the events, paying attention in class and giving 100 percent effort they will someday earn their black belts, and for one of them …… he hopes to have his own CTI martial arts school someday!
Posted by Colorado Taekwondo Institute at 12:24 PM