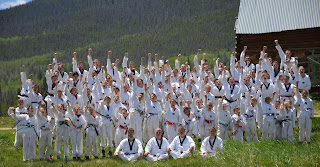 It was one tough group that made it through Camp MSK '17!  Moo Sul Kwan campers spent the week at Snow Mountain Ranch in Colorado, and had a great time!

This year's Camp MSK was sandwiched right in between the MSK Summer Expo and and CTI Black Belt Team World Tour.   After an excellent Expo, everyone seemed to be in prime shape for the 20th Camp MSK.  The pressure was on to have the best Camp possible and springboard the team to Norway/Sweden.

At Camp MSK '17 there were so many things that everyone accomplished.  Poomse, sparring, exercise, biking, swimming, breaking, hiking, one-step sparring, basketball, volleyball, table tennis, self-defense technique, and so much more was enjoyed by everyone.

Camp MSK '17 lasted for six days and always started out with a black belt workout at 6:00 AM followed by a red belt workout, both led by Grandmaster Sautel.  After breakast, everyone worked on various elements of their Moo Sul Kwan technique, team demontrations and more!  This year, the very first Camp Clash took place with the Camp Teams competing in different areas each day.  This year, each Team was named after a Colorado Mountain Bird!

On the last morning of Camp MSK, demonstrations were performed for parents, family members and friends. Each were done to music and symbolized that team's bird.