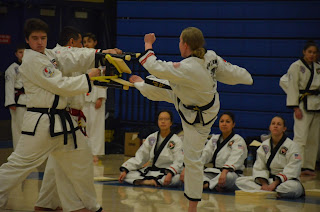 This tournament is a special one.  Usually, at tournaments, the only competitors allowed to win the Grand Champ, and the amazing sword that goes with it, are Black Belts.   This tournament was for the lowerbelts. They had the chance to win the Grand Champ.  Last tournament, the winners of this award were Karen Carreon (Red Belt, Conifer Campus), Jason Stencel (Red Belt, Westminster Campus), and India Ross (Brown Belt, Westminster Campus) .  A lot of people did really well and the competition was at its best. It was very entertaining to watch.

While the lower belts did phenomenally well during their day of competition, the Black Belts did well too.  Even though they could not win the Grand Champ award, they still had a very great tournament.  One of the best things to watch was the breaking. The younger black belts did fantastic but the 3rd Dan and up power breaking was killer.  The competition was entertaining and thrilling. Special rules were put in place for the sparring divisions, each round lasted three minutes.  The first 30 seconds were one sparrer using hands and the other feet and then it switched.  The last two minutes were regular. The competition was very fierce.

Signifying the end of the CTI year, attendance levels at the tournament were very high, in fact it was the largest Super Bowl of all time!   Students of all ages and ranks competed in divisions, some with eight people in them. This has been one of our best tournaments yet, and more are on the way.
Posted by Colorado Taekwondo Institute at 4:49 PM