Famous physicist Niels Bohr’s moto was contraria sunt complementa.  In English this translates to opposites are compliments, meaning that two things that are wildly different will work well when put together.  Niels Bohr never practiced martial arts and was actually describing the nature of light and matter in the universe when he adopted this quote, but the underlying concept is useful when considering many aspects of life including Taekwondo.  Taekwondo has many different opposing pairs of techniques or concepts.  For instance a block is opposite from a strike and a targeting a low area is opposite from targeting an opponent's head.  The concept  of complementary opposites can be particularly constructive when thinking about one steps and sparring in martial arts. 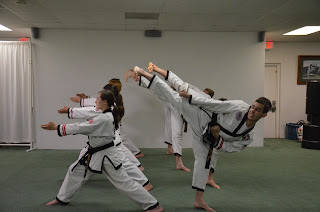 While sparring, it is vital to use techniques that work well together during combinations.  There are many ways to put a combination together but combinations made while thinking about complementary opposites will be especially effective.  A double kick which targets the same area on both kicks may be effective, but a double kick which first targets a low area and then targets the head can mislead the opponent and be much more likely to impact.  Another complementary pair in sparring are kicks and punches. Novice sparrers will often utilize combinations that contain only hand techniques or only kicks.  This leads to combinations that run out of steam more quickly, are more easily defended against and which are not as effective as possible.  Simply adding a kick to the end of a hand combination can surprise and overwhelm the opponent.  By adding a kick to a hand combination the combination gains not only an extra limb to use as a weapon, but also gains new angles from which to attack.  After throwing a single or double kick in sparring it is critical to follow up with hand techniques; those who don’t end up falling prey to their opponents counter attacks.  The concept of complementary opposites is even more developed in one steps, which connect basics and sparring.

In the Colorado Taekwondo Institute Student Manual there is a list of one step sparring rules. Many of these rules contain the idea of complementary opposites.  There is a one step rule which says that there must be a block before a counter strike.  Another rule states that target areas are changed in one step techniques.  There is even a rule about practicing both sides of a technique.  All of these rules, which highlight the concept of complementary opposites, are built into the structure of every one step.  Even outside the written rules one steps display the idea of complementary opposites.  Every one step technique that has a kick as part of the defense follows up that kick with a hand technique.  The only kicks which are not followed up in one step sparring are performed by the attacker, giving the defender the opportunity to use their defense to demonstrate the deficiencies of attacks which are not complementary.
Posted by Colorado Taekwondo Institute at 12:17 PM